Using git can be daunting at first. Like my good friend Chris once said, "everyone knows the happy path but the minute it gets hairy we're all screwed".

I've decided to take a closer look at what git commands our engineering team uses on a day to day to get out of hairy situations.

This first part will dive and revisit some of the basic git commands and will serve as a basis for the second part which will look into some of our favourite git tricks, workflows, case studies & more advanced scenarios we sometimes get into.

We will be using a Github repository that I have created and can be found here.

I actually messed up multiple times doing this, goes to show, git fixes become an intuitive thing after a while.

Before we dive into any commands, we need to understand the versioning tree of our project.

Our versioning tree consists of

I suggest reading this and the above image side by side, all PRs available here and referenced with PR #

Taking a look at the commits associated with merging feature branches into dev: notice how you cannot see the commits of a branch that has been "squash merged" (04a3ccf & b47bcda), unlike when simply merging (04e7c85 & e65b8b0). In other words, if we had squash merged our first feature branch for example, we wouldn't have seen commit c0f1e7b. 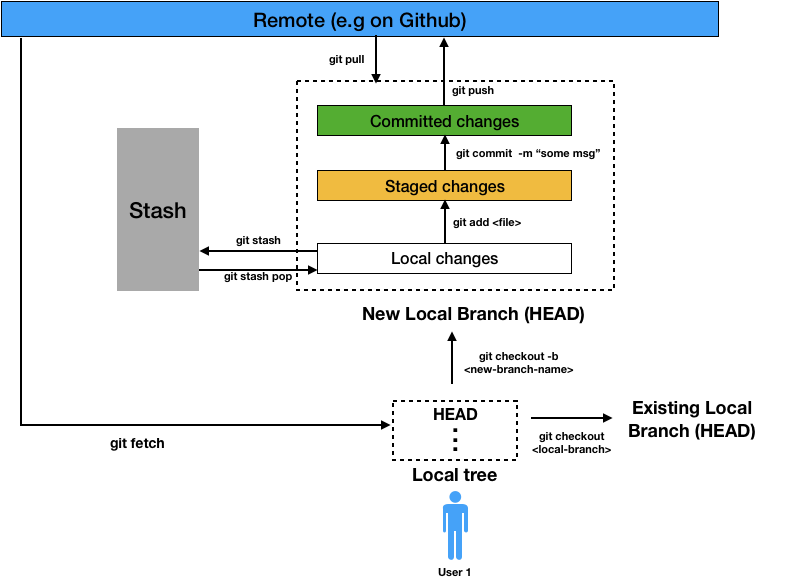 As of git 2.11 one can select a specific stash to be popped instead of just the latest stash using git stash apply n where n is the stash number.

Git is a powerful tool when the basics are mastered correctly.

We have visited some of the essential commands that we use here at Risk ledger and believe me when I tell you that they've saved us numerous times.

There are multiple case scenarios we will explore in the next part:

At the end of the day, nothing beats the official git book, so if you haven't yet, do yourself a favour and check it out here.